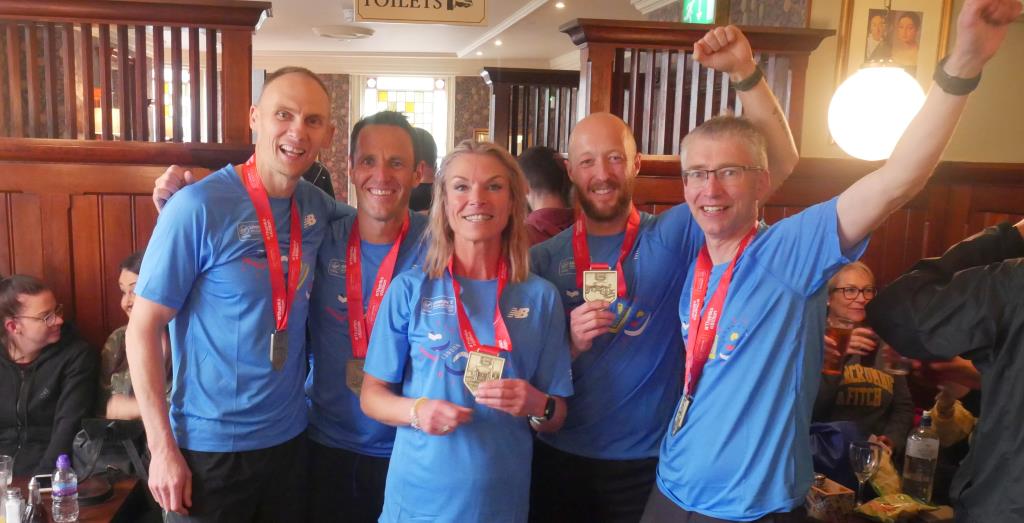 My marathon journey started in 2010 when Kath and Nick ran the inaugural Kielder Marathon. Since then I had been with Kath to marathons in Manchester, Edinburgh (twice) and London (five times).  At first, I was not inclined to run a marathon, but after attending the London Marathon as a spectator, you can’t help but want to get involved and do one.

I always said that if I did one, it would have to be London first in case it was my last.  So, the journey began several years ago, Ballot Entries, Club Ballot Entries, Competition Entries all to no avail until… :2019 - Club Ballot: we managed to get 2 places and both Paul Brown, and I met the selection criteria.

Note: you are much more likely to get a place through the club ballot than the general ballot.  Remember the criteria for next year will include: Joined before 01/03/17, not had club number or run London before, rejected in ballot, undertaken volunteer duties 01/03/18 to 31/08/19, competed for NMH in a team competition between 01/3/18 and 31/08/19 (Cross Country / Road Relays / Track & Field). If you meet all the criteria you have a better chance.

The hardest part for me was getting to the start line in one piece, loosely following a marathon plan I steadily increased my mileage, never having done more than 15 miles before.  Things were looking more positive by the time I ran the South Park 20.  Finishing in 2:40 at 8-minute mile pace with something left in the tank, or so I thought…  Then the taper.  All sorts of niggles appeared during my taper, whether they were real or not I am unsure! 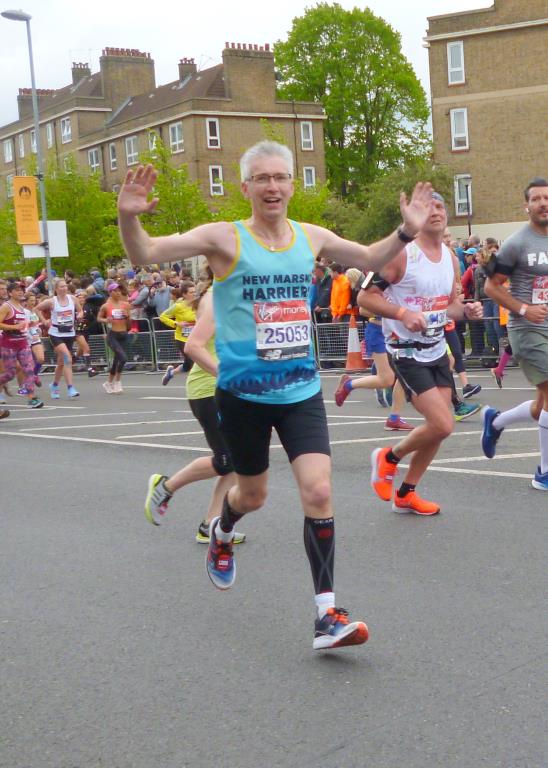 A gentle 1 mile walk from the hotel up to the start meant we had a leisurely breakfast. After leaving Sharon at the championship pen I looked at the toilet queue.  Good job I only need the urinal as what a queue, never seen a longer queue with only 10 minutes until the zone closed.  Ladies get practicing with those shewees!

With thousands of runners I thought it unlikely I would meet anybody I knew, but there in the Zone Trish Speedie, Katie Coulson and Lou Trainor appeared (I won’t detail their loo experiences!).  So 8 minutes after the gun, seemed along time given how close to the start we were, we were off.

Trish and Lou soon disappeared off in to the distance, it would have been so easy for me to go off much too fast.   The first 5k included a downhill, perhaps a bit quick for me but I soon got into a rhythm.  Kath and Olivia were there at 7 miles to grab my profile picture, still happy then!

I ticked the miles off, breaking it down into 5 mile segments with a gel at the end of each segment.  Things started not feeling quite right in the mile up to Tower Bridge which seemed slightly up hill, that came and went and Tower Bridge was amazing with the crowds.  Shortly after I hit the half way point, spot on my target pace.  At the same time Charlotte Ellis was going the other way having set of an hour earlier, quick cheer. Next marker was the 16 mile point where Kath and Olivia were waiting.   This is where the wheels came off.  The pace I had been comfortably managing became more difficult.  No specific injury just lack of energy. Looks like I peaked at South Park.  So the last 10 miles was just about getting to the finish, but with a smile on my face, taking in the atmosphere which was amazing.   In the last 3 miles I started running with Catherine McShane from NYMAC who was in a similar position to me.  One of us would go ahead and the other catch up and visa versa.  But the last 1km or so we ran together.   When I saw the 365 yards to go banner I was determined to enjoy the finish, could have done without that headwind in the home straight though!

So that’s it, marathon done, will I do another?  So many people I have seen finish a marathon have said never again!  Well maybe I will do another, but if I don’t I have had a great experience which I would recommend to anybody.   The hardest bit was probably managing the expectation (probably self generated) that you have a club place so must do it, everybody is watching you on the tracker so you don’t want to mess up.  Perhaps the best way to do a marathon is just to enter one and not tell anybody!

There were some amazing results from other New Marske Harriers.