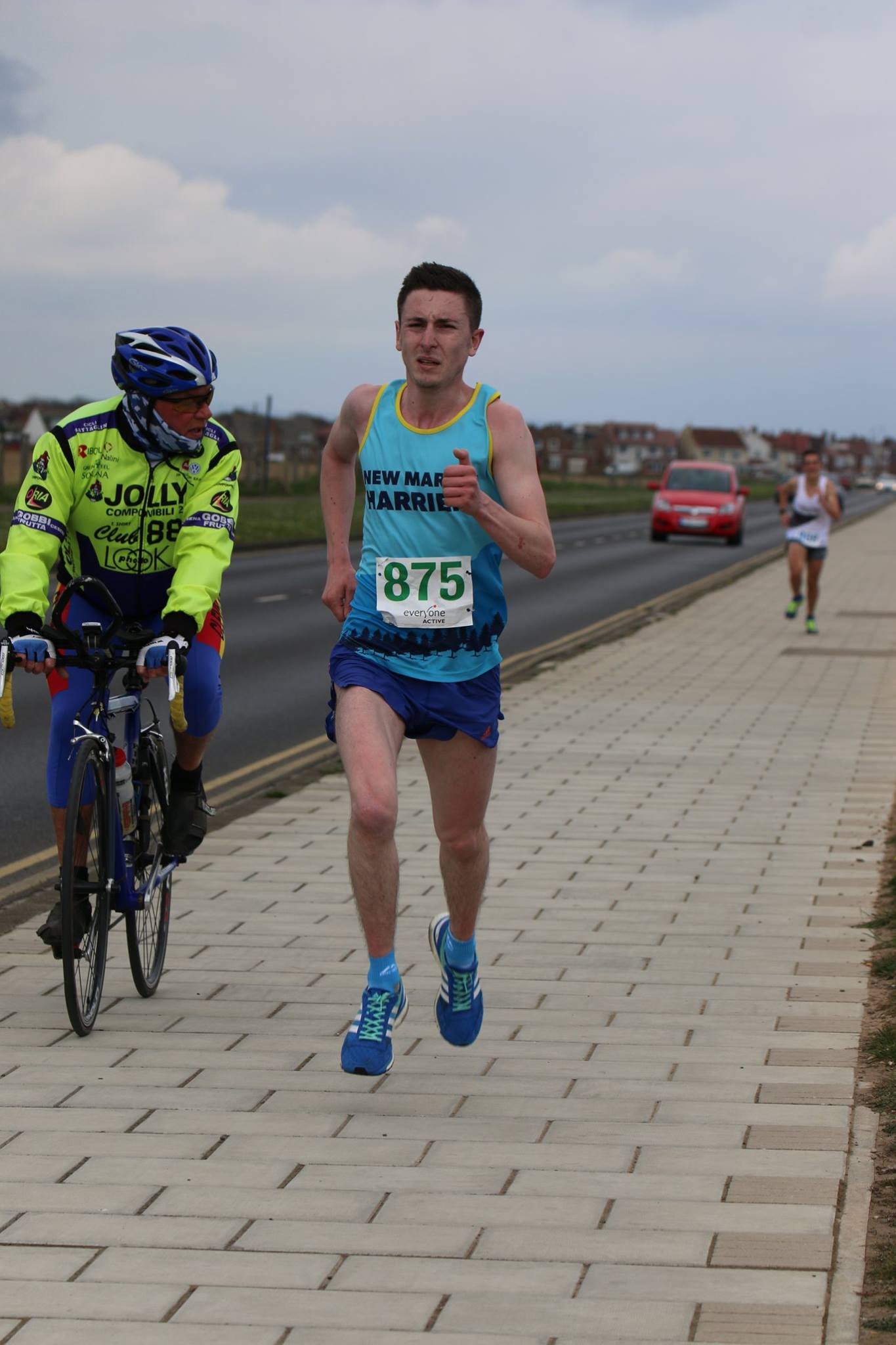 A great win for Dean Newton with Tristan Learoyd in 3rd both with PB's and Martin Murray in 5th. Michael Joyeux 2nd also with a PB and Paul Lowe 4th.

Dean was back on form and took the lead of the breakaway pack of Michael, Tristan and Paul Lowe. The first mile was covered in about 5 minutes ! Michael and Tristan kept in touch with Dean as Paul dropped off the pace. 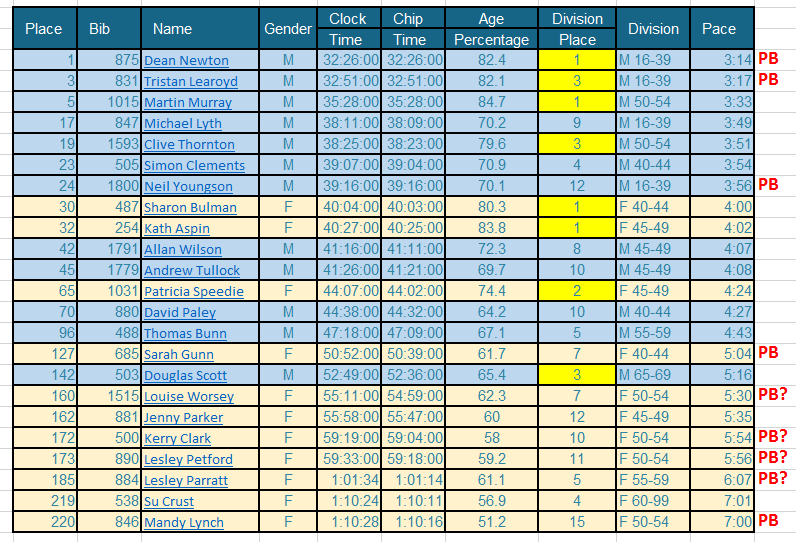 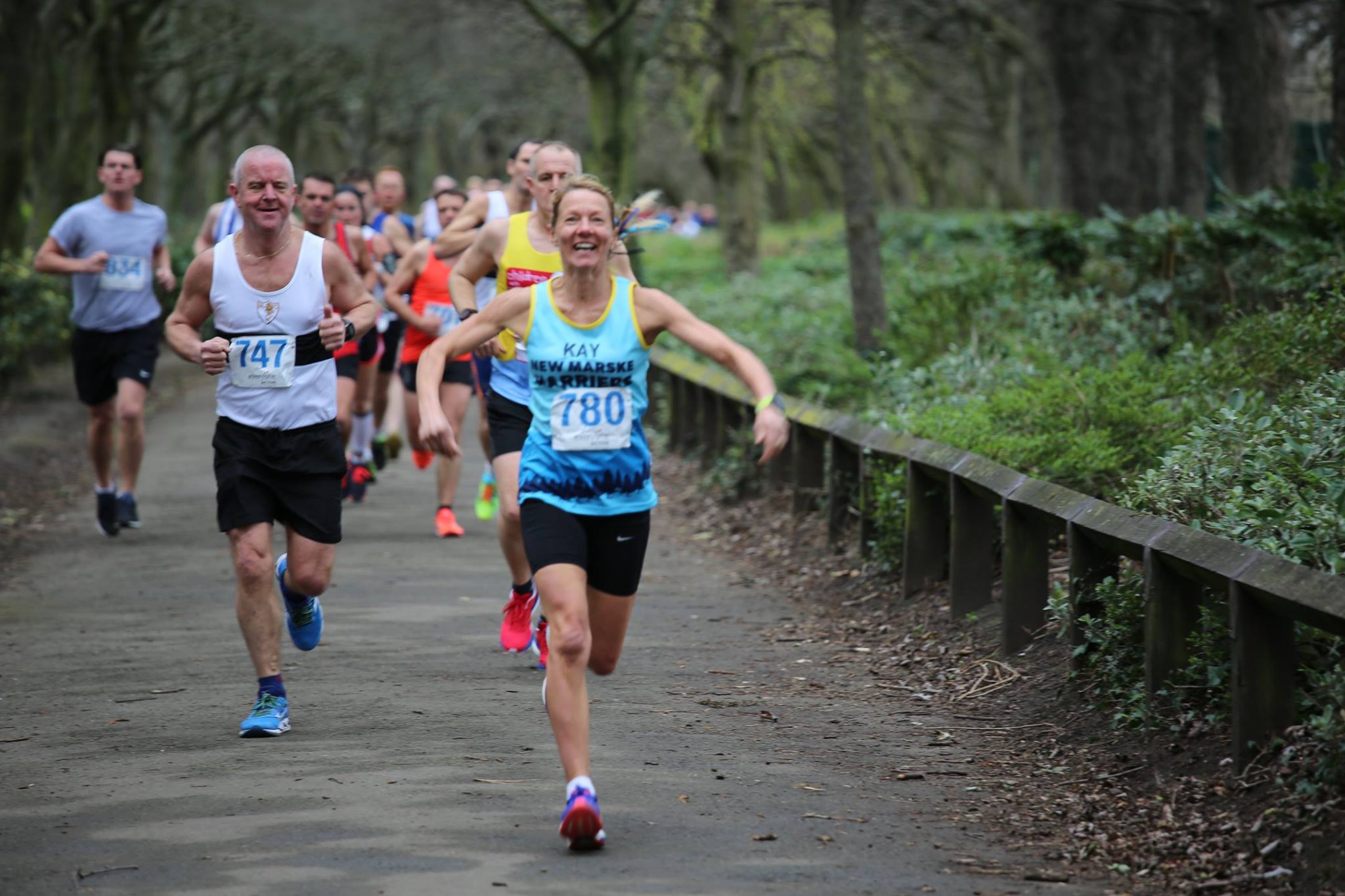 The weather managed to stay fine for the runners in the Locke Park 20/10 miler.  For the first time we offered the option of finishing at 10 or 20 miles but not inbetween.  Some decided to race 10 and run a further few laps to make up their training miles.  The results and prize winners are detailed below, but well done to our overall Age Graded winners Shirley Gibson in the 10 miler and Kay Neesam in the 20 miler. 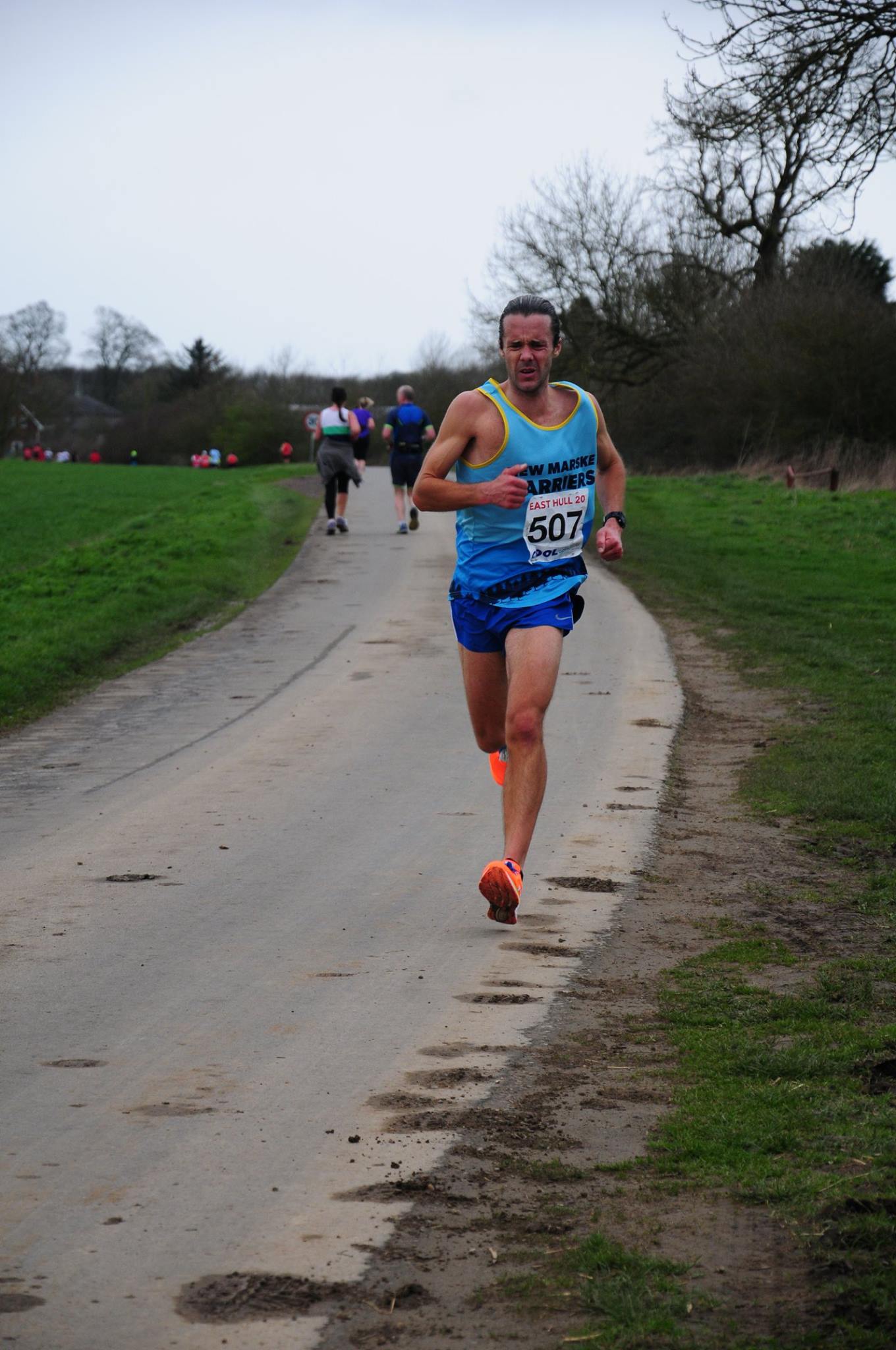 After a build up and advice from Steve Shaw I tackled the East Hull 20. The objective was to run under 1:50:00. I'd had a couple of goes at running inside 1:53:30 in training, running 40 laps of the half mile block outside my house. In good conditions I knew going into the race, I had already ran 1:52, and 1:50 was on if I ran even paced. It would mean a PB through 13.1. My half marathon PB was ran on a windy day in Redcar and I was confident it would go irrespective of the conditions in Hull.
Unfortunately, every single target race I've ran since May bank holiday 2016 has been in horrific conditions. So I knew Hull conditions would be accordingly bad. The prognostic was for 40mph head winds. So I made a paper Voodoo doll during the week in an attempt to reverse my fortunes. I sat it in the window in a trophy from the previous weekend's race, facing Hull.
After two years of wearing no watch, today I ran in a Garmin. The pace early in was too slow as it slipped over 5:40, so I had to run from the front and encourage others to run slightly under 5:30. Somebody in the pack remarked "what good conditions". Almost immediately the wind got up and blew the pack of 10 down to 3 and the chatter stopped. I knew to keep the pace going I'd have to encourage the two remaining runners to share out the running. One of the runners was Spanish so I spoke to him in his native language to encourage him to share the lead. "Deberiamos compartir el trabajo."
Despite the wind, all was going well and at 5 miles we had brought the pace back to bang on 5:30. Then Daniel Kestrel of Barnsley put in a surge. From my training I know I can run 5:30s all day but anything sub 5:23 is a problem. So I had to let the two runners go. They ran close to 5:00 for mile 6. I hadn't backed off enough and ran 5:15. So now I had lactate in my system and I knew if the wind got up in the second half things were going to get brutal. I went through 10 in 54:30. This was my target for 10 miles. In perfect conditions I was confident I'd close out in sub 1:50.
Then I turned, about 200m back from the front pair, for the final 10 miles. The hedges along the roadside disappeared. The wind became savage. The 11th mile was 6:00. The 12th mile as ugly. At 12 Dad appeared with a Lucozade. I provided evidence of my amateur status by chocking on the drink and shouting "it's like running in a f*cking wind tunnel".
The final 10 miles were brutal. Alone, exposed, and being blown like a rag doll. I then thought about the Voodoo doll. Bet he's laughing now. Apparently you're supposed to drown successful weather charm in alcohol and give them a dignified burial. "Stuff you you're going down the loo" I shouted aloud as I battled the wall of wind alone along the railway.
I could see one of the front pair had dropped off the pace and mile 15 turned out of the wind and I popped off a 5:30. But then mile 16 hit the wind again. The final four miles were savage. I struggled to maintain 6:00 pace in the wind I cursed at the sky "every f*cking race". By mile 19 I could hardly breathe spent from an epic fight with the elements. I finished 3rd in a provisional 1:52:55, a club record but yet another poor reflection of my form to go in the catalog of times destroyed by the elements.
The Voodoo doll met a miserable end. 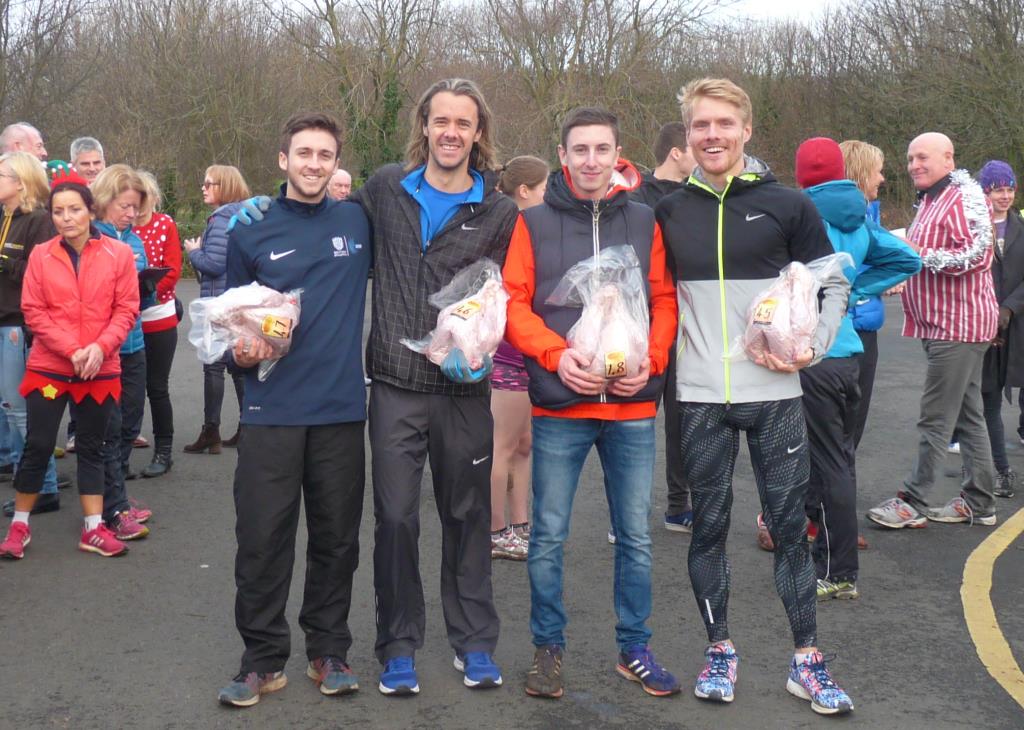 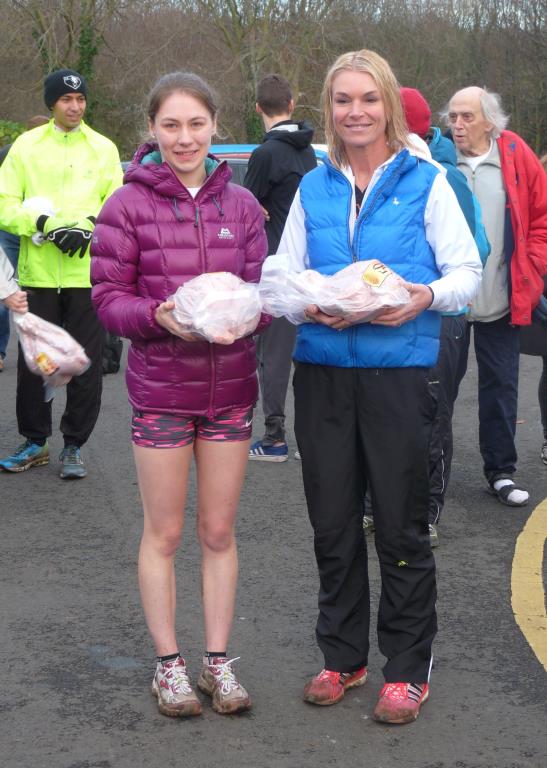 Another good race at the Loftus Poultry Run with Marc Scott and Russ Best neck and neck with a mile to go with Marc edging it over the final mile to win with Russ 2nd and Greg Jay 3rd.  New Marske dominated the top of the leaderboard with Dean Newton 4th and Tristan Learoyd 5th. Not seen the final results yet, but Harry Allan was 6th with a mile to go and Aidan Rigby 8th.