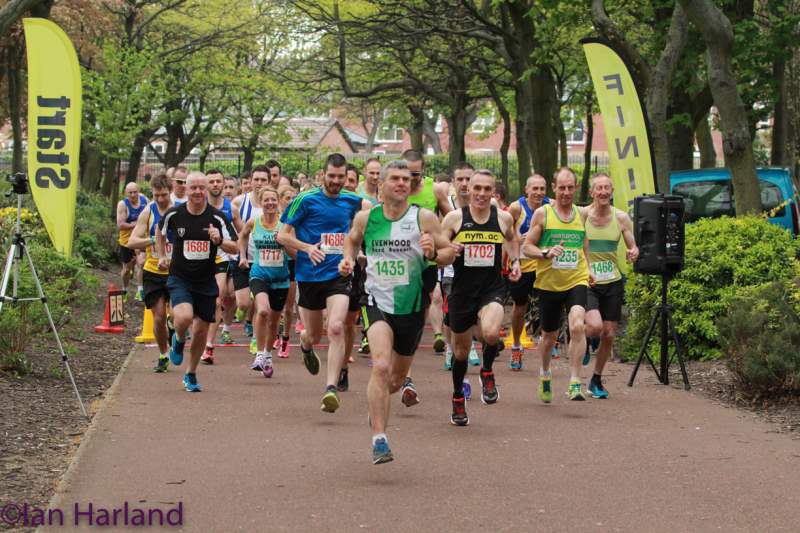 Another sell out race for New Marske’s Locke Park Pie and Peas 5mile race.  Evenwood’s John Clifford and NYMAC’s Paul Lowe went out fast looking to burn off enough room for the Pie and Peas that greeted them at the finish.  Paul had the edge in the final couple of miles and came home in 27:03, 10 seconds ahead of John with Noel Hitchcock of Sunderland Harriers 3rd in 28:20.

It was a great night for personal bests with the 1st three across the line all getting PB’s along with New Marske’s  Paul Cleasby 29:49, Cheryl Poulter 41:15 and Caroline Chinnock 45:21.

Results can be found here

Photos from Ian and Karen here 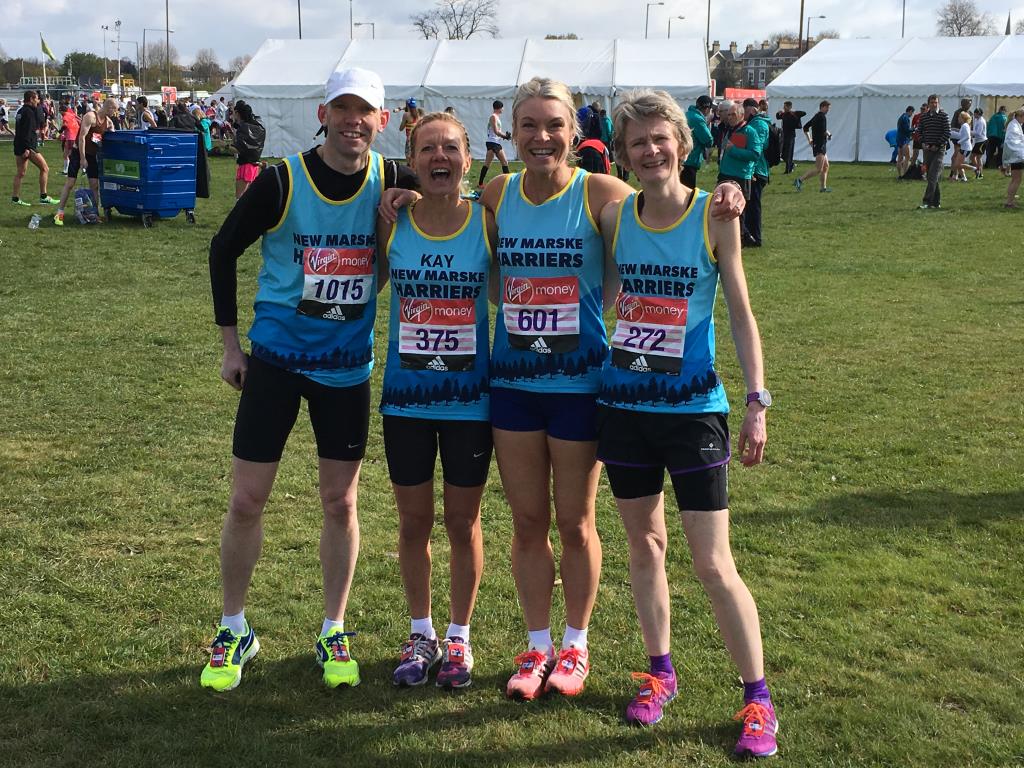 For the first time in Club’s history New Marske Harriers had a ladies team in the English Marathon Championships at the London Marathon.   Kay Neesam, Sharon Bulman and Kath Aspin along with Shaun O’Grady had all got the qualifying standard to start with the Elite men on the Championship Start.   The three ladies all had great runs with Kay finishing in 3:03:08, Sharon PB 3:04:15 and Kath PB 3:13:18.  The overall team results have not yet been announced but they did well against much younger opposition.

For visually impaired Charlotte Ellis it was a challenging race “pleased with over a 4 minute PB especially in such a visually demanding race, all credit to the guides.”  Ably assisted by her guides Carla Stansfield and Paul Cleasby, Charlotte had to dodge not only the other runners but thousands of discarded water bottles around the course.  For Paul it was a new experience “I wasn't sure who was guiding who at times. There can't be many more visually challenging road marathons than that. What Charlotte is prepared to go through for the sake of running is beyond amazing.”

Also running in London at the Virgin Marathon Mini Marathon were Hassan Ben-Tiba who was 48th in his age category and Rebecca Tilley 39th.

Apologies for the limited number of Photos, but in 39,000 runners it is difficult! 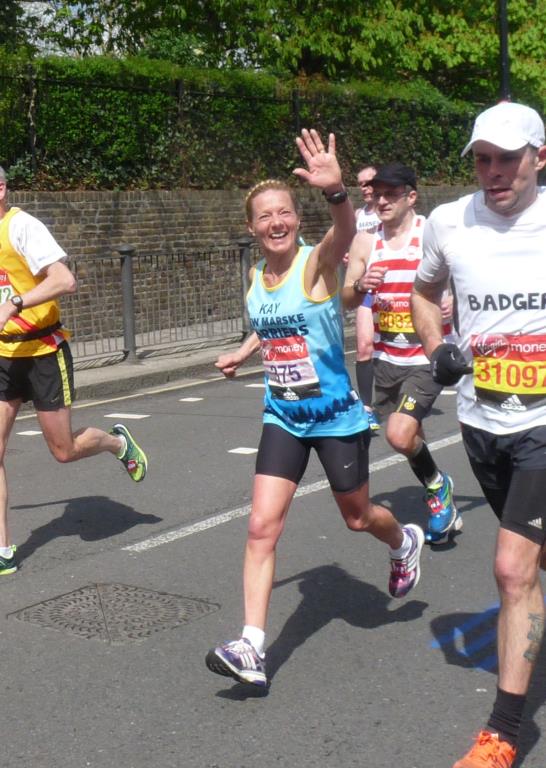 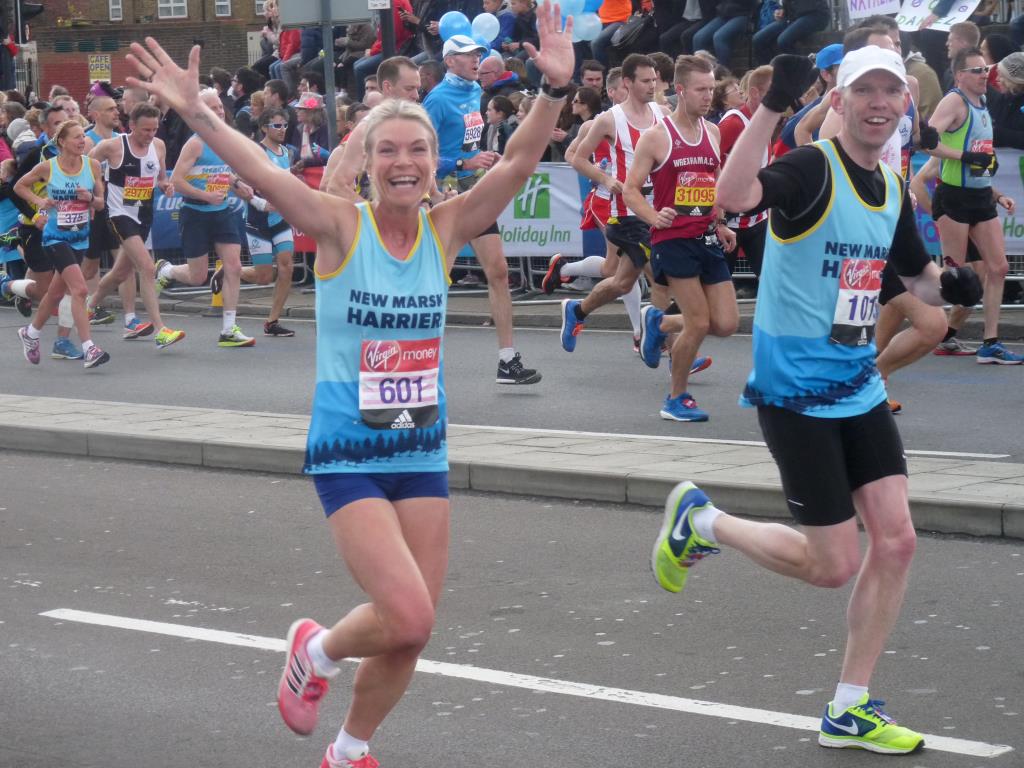 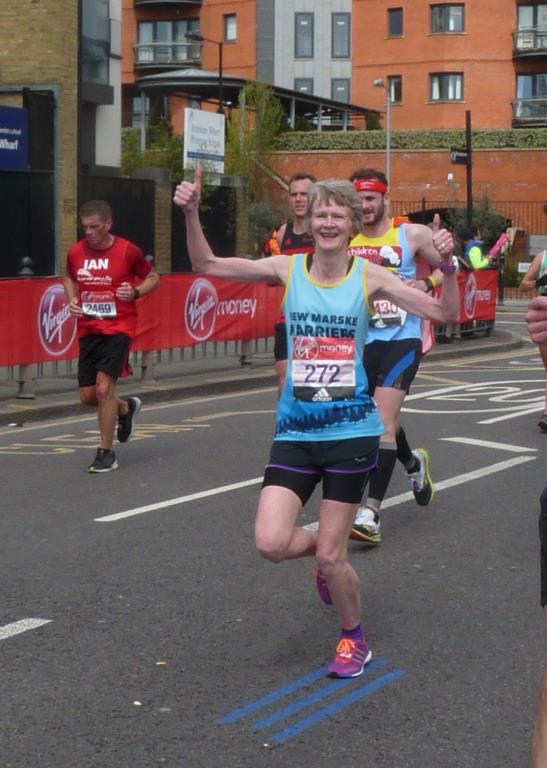 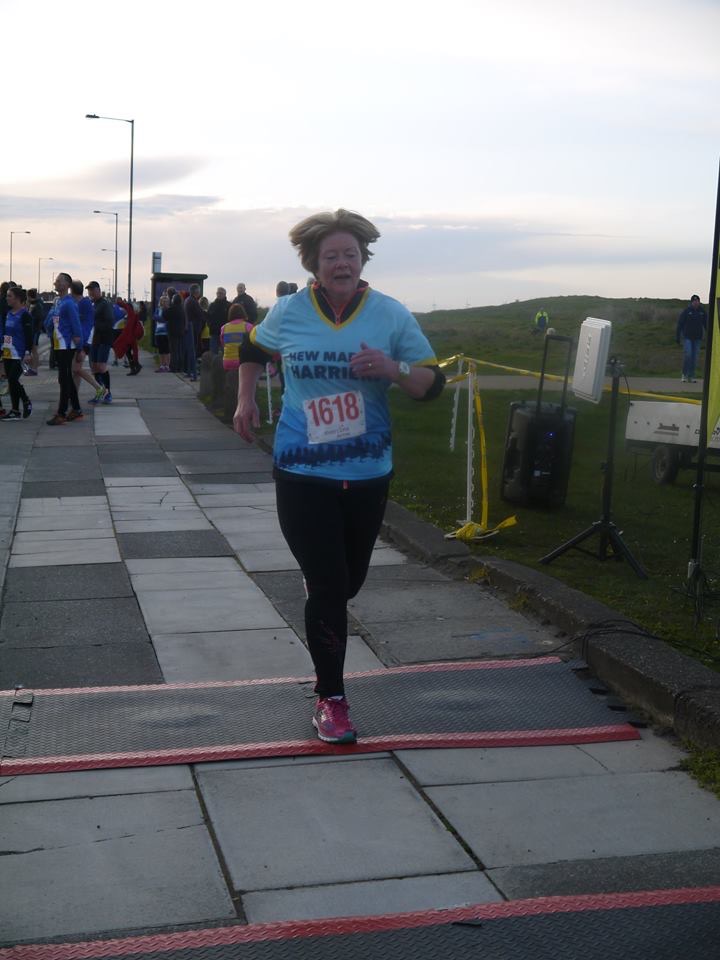 The weather forecast wasn't good, so those took the chance were rewarded by better than expected conditions and some really good runs. 40+ PBs on the night!

First to finish was Teesside based Gateshead Harrier Matty Hines in a time of 14:54 - 40s ahead of 2nd placed Marc Fenwick from Tyne Bridge. Leading New Marske Harriers were Darren Thom 4th (15:43), Harry Allan 5th (15:46) and returning after long lay off Dean Newton 9th (16:08). In 21st place was leading lady Sharon Barlow of Darlington Harriers in (17:34)

Get results via this link 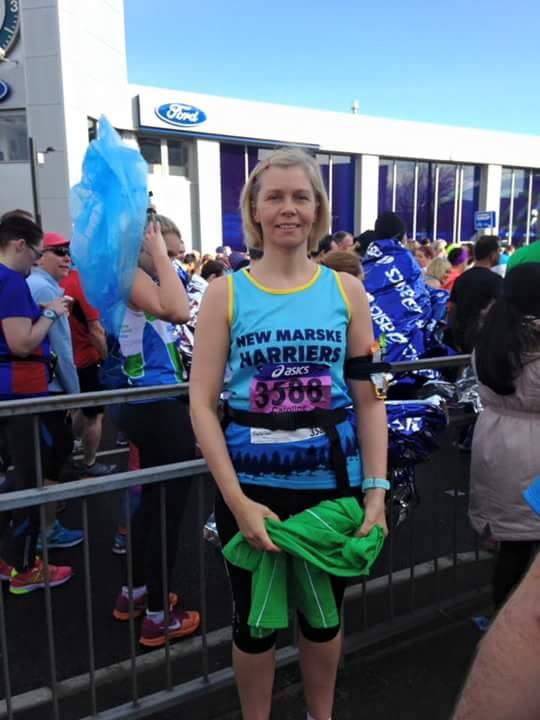 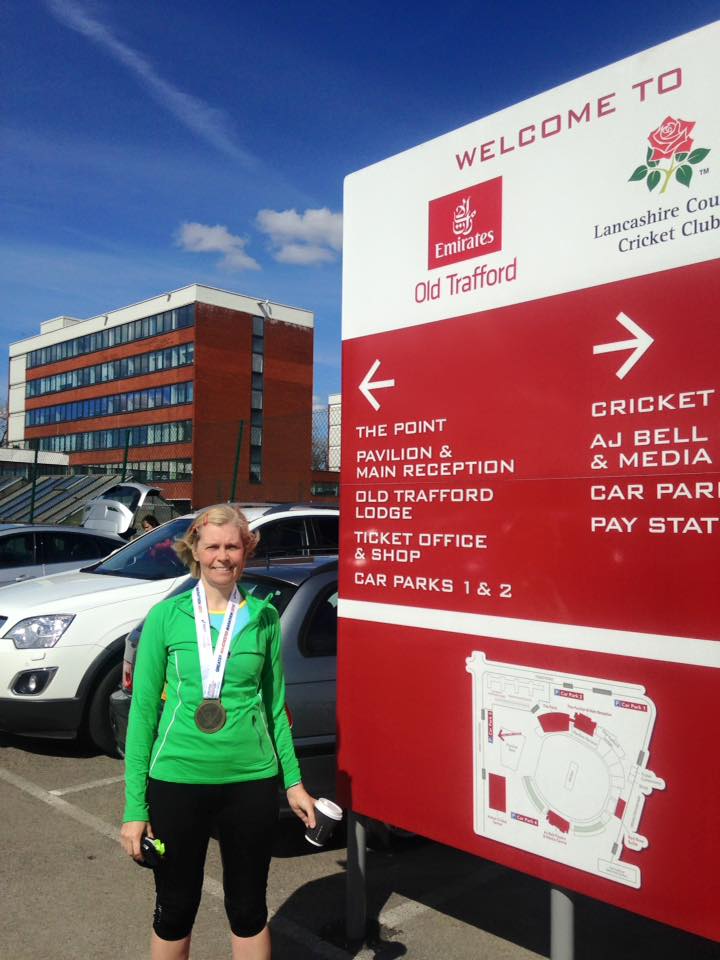 I would never of thought in February 2012 when I decided to put on a pair of trainers and go for a run (instead of sitting for 2 hours most nights on a poolside, drinking lattes, eating biscuits and gossiping whilst my daughter swam) that I would ever complete a marathon.

I did not see the other 4 members of New Marske Harriers as they started further towards the front as I was stood in the ‘happy to finish’ section.

As I stood wearing my new club vest waiting to start I was filled with mixed emotions, extremely nervous yet excited at the same time.

My goal was first to finish the run, second not to come last and third if possible finish under 5 hours.

My strategy was to stay with the 5 hour pacer for majority of the course and if I was able to, pull away from them. However, she seemed to set off at a lot faster pace. I then had the dilemma of ‘do I try and keep up with the pacer’ or ‘listen to my body and remain at the pace I was running at’. I decided on the latter as I recalled the inspirational words of my coach, Graham Hall ‘you can’t put the toothpaste back in the tube’.

A couple of miles in and my nerves settled as did my pace to 11 minute miles and I started to enjoy it.

The highlight for a lot of the runners I was close to was passing the Coronation Street Studios between mile 2 and 3, quite a few took selfies with the studios in the background.

Reaching approximately 4.5 miles it was encouraging to see my husband Brian and Graham and Diane Hall cheering as I passed.

The atmosphere was fantastic as were the supporters and marshals who lined the majority of the course. The entertainment along the course was amazing and certainly helped to carry me around the course.

Between mile 16 and 17 I caught up to the 5 hours pacer and managed to pass her. At mile 17 I was met by Brian, who ran a short distance with me to where Diane and Graham were stood. It is hard to believe how seeing familiar and friendly faces if only for a short period of time can raise your spirits and give you the encouragement and determination to keep plodding on. Brian left me before kindly reminding me that I only had another 9 miles to go. Brian, Diane and Graham then made their way back to the mile 25, which is where I next saw them.

When I reached mile 20 I thought right, I did this 4 weeks ago at Locke Park every mile after this is a bonus. I still felt good, although my pace had dropped slightly to 11.08 minute miles but I was gradually passing more and more runners.

Mile 23 and my thoughts were ‘only a park run left’, I can do this.

It was around mile 25, when I next saw Brian and he ran the remainder of the course with me. This really spurred me on and increased my running pace. When we passed Diane and Graham the end was in sight and at this point all I wanted to do was to finish.

As I crossed the finish line I felt elated and had a lump in my throat. I could not believe I had actually ran it, finished and how emotional I felt. All those months of training had finally paid off.

I said I wanted to run one marathon and that would be it, but running is addictive as is the buzz you feel at the end. I will certainly consider running another marathon in the future.

I would like thank Diane and Graham Hall for all their support, assistance and encouragement they have given me. Without them I would never have had the confidence to enter this event.   (4;52:07) 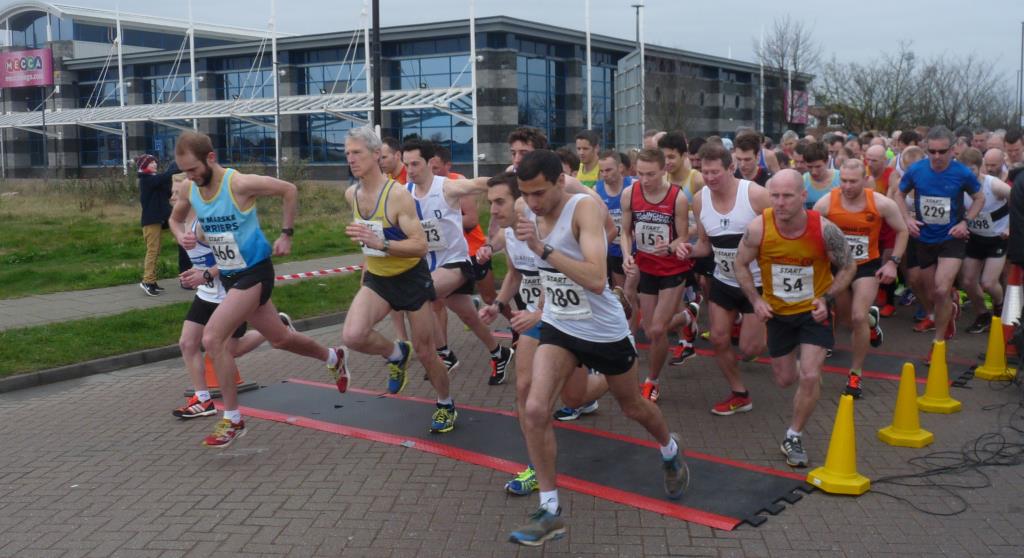 A record 533 finishers completed the annual Hartlepool Marina 5 mile road race in near perfect conditions.  Taking a break from writing about Premier League chasing Middlesbrough, the Gazette writer and New Marske Harriers Athlete Dom Shaw glided to victory setting a new course record of 24:24 knocking a minute and a half of the previous course record set by 2nd placed Middlesbrough and Cleveland Athlete Greg Jayasuriya, 25:57.  Quakers Michael Joyeux completed the top 3 in 26:07.

Dom took control of the race after the first mile and steadily picked up the pace to set his 3rd PB in 4 weeks following on from PB’s in the Trafford 10K and Thirsk 10 mile race.

It was good day for the New Marske men with 17 year old Hassan Ben-Tiba coming in 4th in 26:29 to pick up the junior prize and 16 year old Harry Allan, 7th 26:45 clinching the men’s team prize for New Marske. 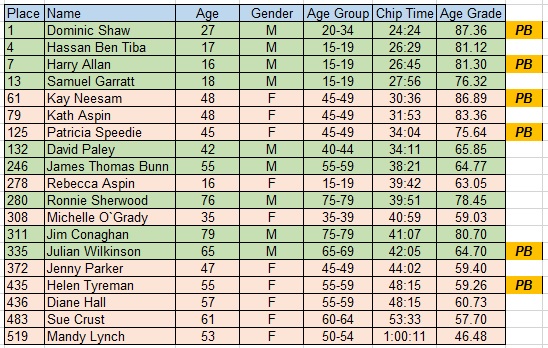