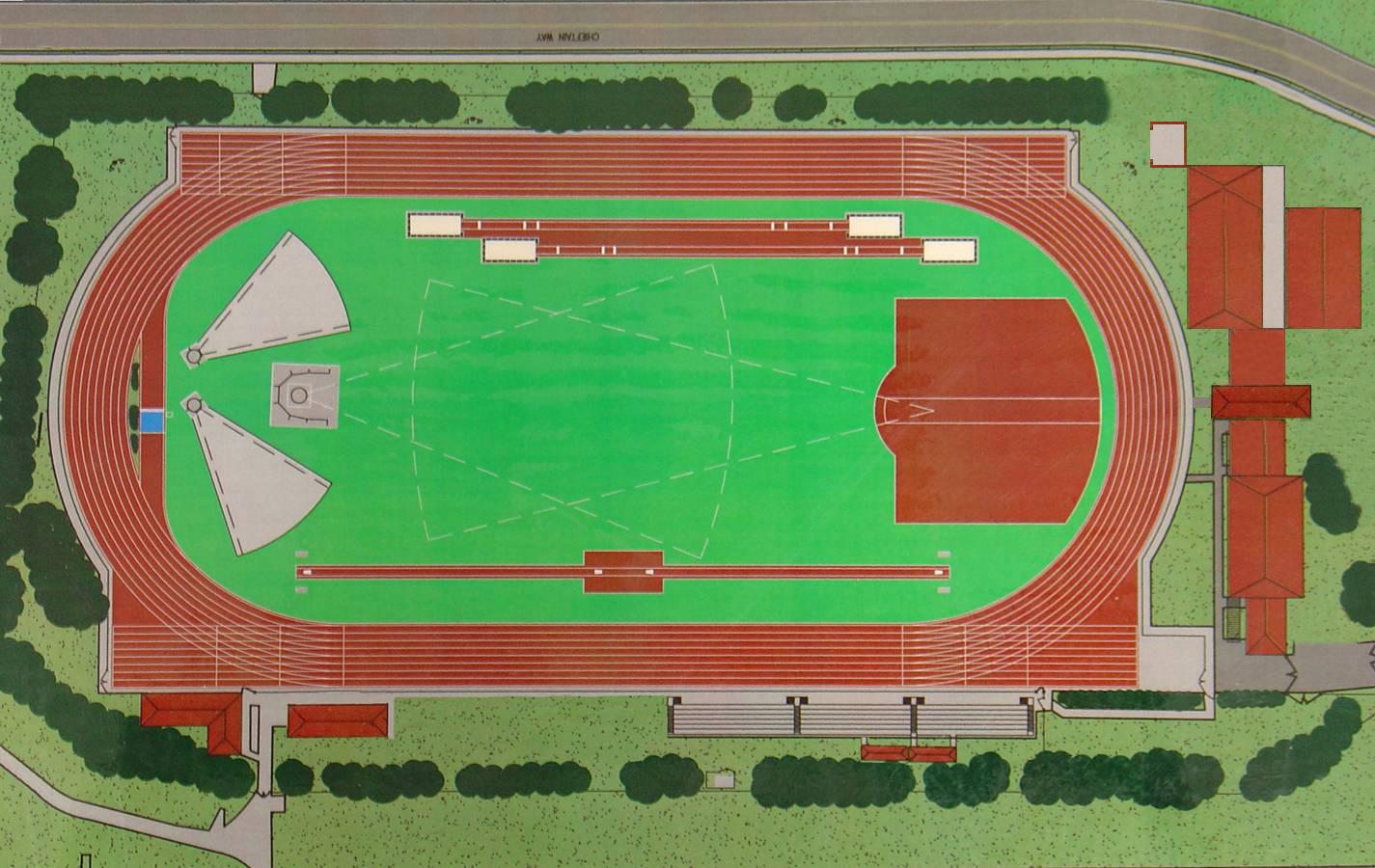 Here are the final positions - click on link for relavant category award: 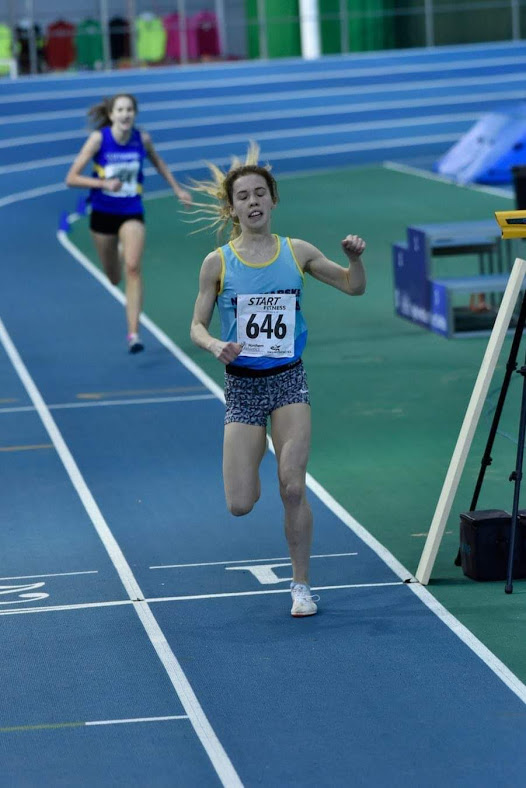 Well done to Elicia Smith, North of England indoor U20 3000m Champion. On Sunday 13th January, Elicia competed in the NoE Indoor Championships at the England Institute of Sport in Sheffield. Elicia ran the U20 3000m (15 laps of the track), leading from gun to tape. Her time of 10-35 puts her currently in 2nd position on the Power of 10 rankings. A brilliant run Elicia. 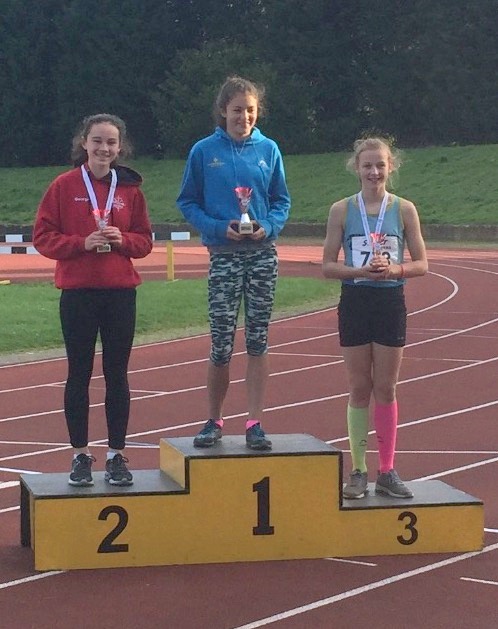 Many congratulations to Molly Thrower for her performance in the recent NE Pentathlon at Jarrow.

Molly finished 2nd in the North East and 3rd in the Open Competition from a field of 30 U13 athletes. Competitors from Scotland and all over the North of England took part in the  competition.

Molly managed three PB’s during the day. Shot putt 7.60m, 800m 2-49.01 and high jump 1.41m.  Molly’s hurdle time was a little below her season’s best at 12.07, as was her long jump with a performance of 4.43m.  Her overall score of 2343 points is an amazing score and also a PB which puts her 12th U13 girl in the UK. A brilliant day Molly and well done for once again putting New Marske Harriers in the spotlight. 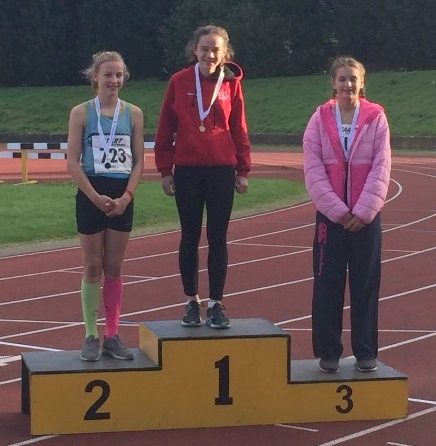 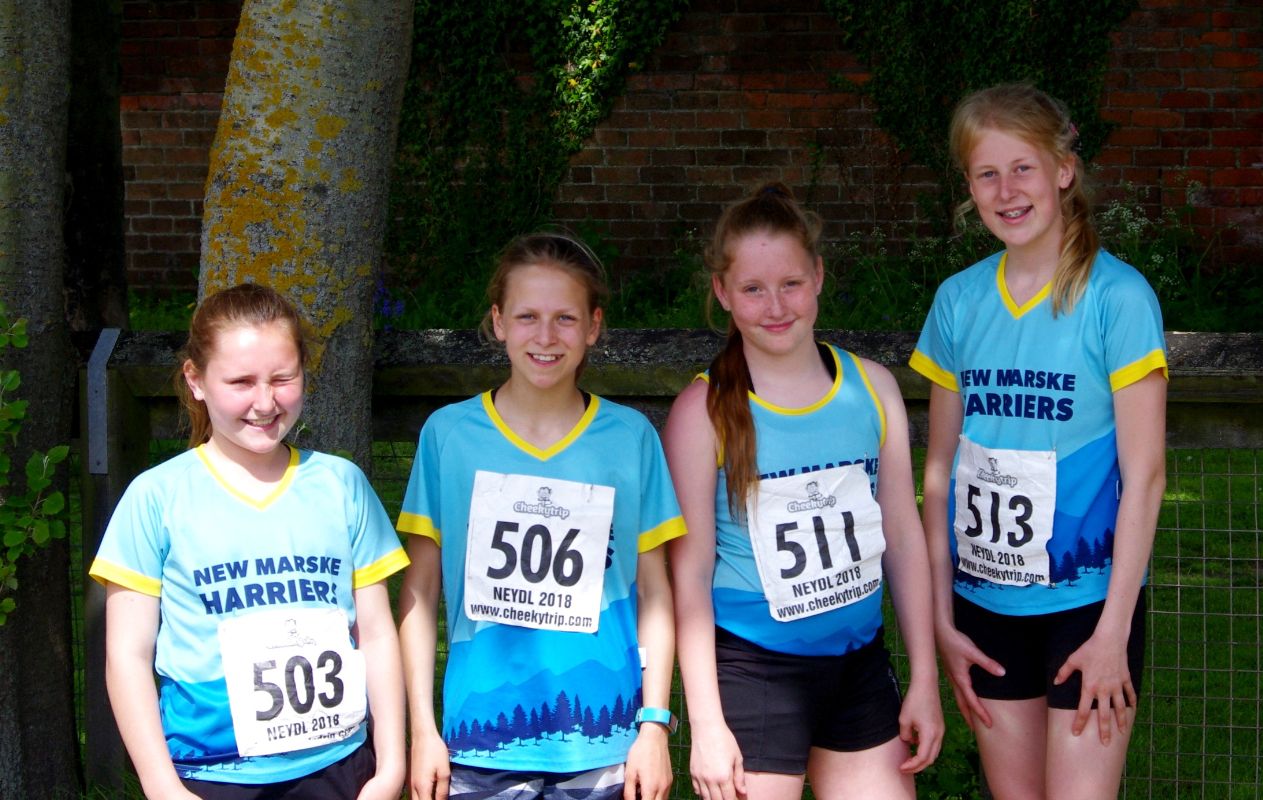 Another glorious sunny day in Whitley Bay, I must say I could get used to this weather.

Our team was smaller than our last match because of exam commitments, illness, injury and the usual family occasions.  However this led to an enormous team spirit, everyone encouraging every performance.  People were prepared to have a go at anything intermingled with some spectacular individual performances, resulting in a wonderful day.

Among the many highlights of the day was the breaking (again) of the League Javelin record by Charlie Jefferson. Well done Charlie you will break 50m yet!! Our intensive relay training earlier in the season, ensured we got the baton round and made a decent showing in this area. We had the only pole vaulters of any of the teams. And we had a healthy showing in the girls long jump and many of the throws. In her first High jump competition, Georgia managed to be the last one standing and cleared 1.18m! Well done to all, brilliant effort.

The low lights included me having to spend the day in my slippers having forgotten my trainers!! 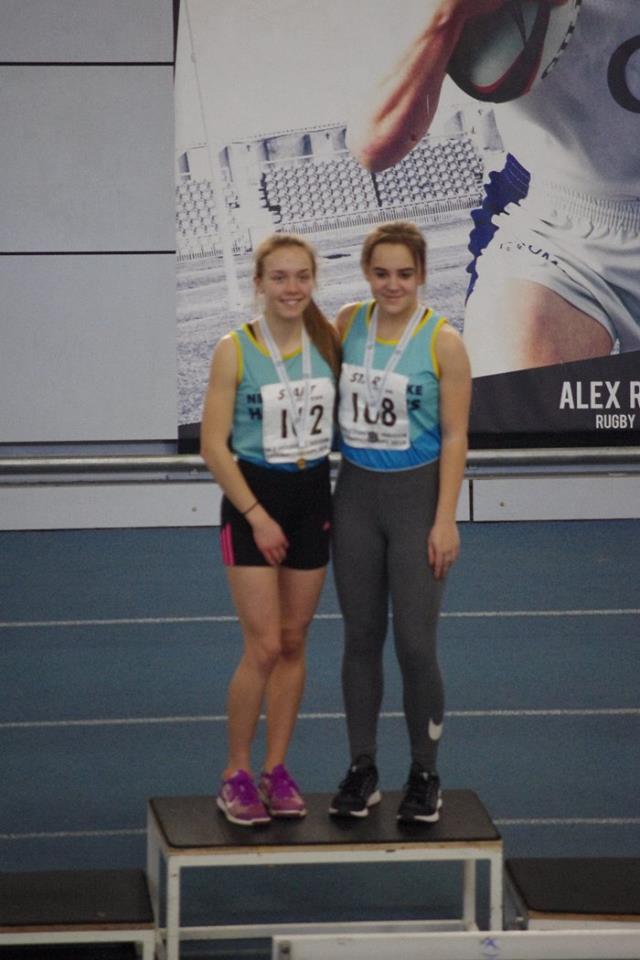 Congratulations to all the athletes from New Marske Harriers who took part in the Indoor Championships at Gateshead last weekend.

6 Athletes took part and came away with 5 gold medals, 1 silver and a bronze, not to mention a few PB’s thrown into the mix.

Molly Thrower won one of her golds for long jump by equalling the championship record for her age group, making her 5th in the country (4.53m).  She won her second gold for the 60m hurdles, and managed a10.02 sec run in one of her heats making her 7th in the country in this discipline! UPDATE: Molly was also awarded an "Athlete of the Match" award for her long jump performance.

Her sister Jordan took part in the u17 category, and won a gold in the Triple jump (11.01m), strongly supported by Libby Currie competing above her age category to get a well deserved silver (9.36m). Jordan also won a gold in the long jump, with a jump of 5m19cm. Our bronze medal was also won by Jordan for the 60m Hurdles (9.60 sec).  Well done Jordan.

Our fifth Gold medal was won by Matthew Brining, getting a wonderful 3m 60 in the pole vault, from a short run up and making his way back from injury. Well done Matthew.

Other 60m sprint participants included, Libby Currie (8.64) and Matty Walker (8.36 sec) .  Matty equalled his PB in the high jump at 1m 50 and together with Libby got PB’s in the sprints also. 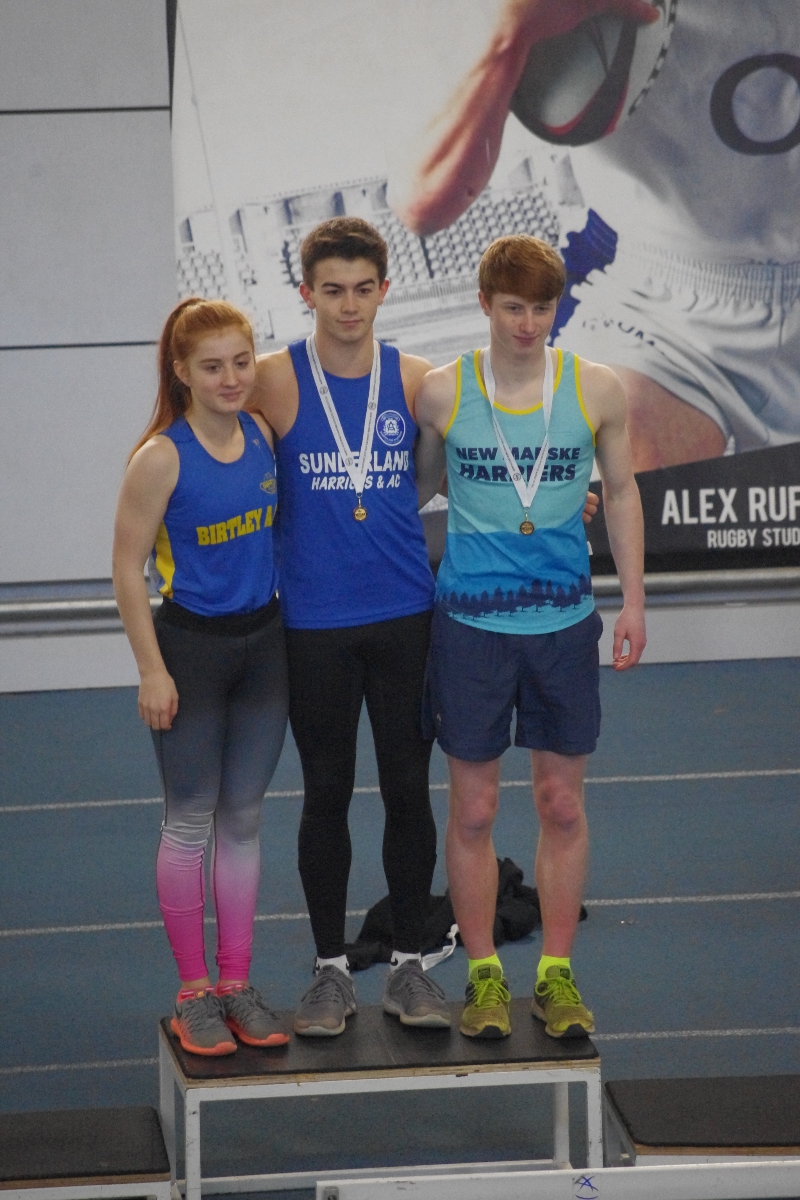 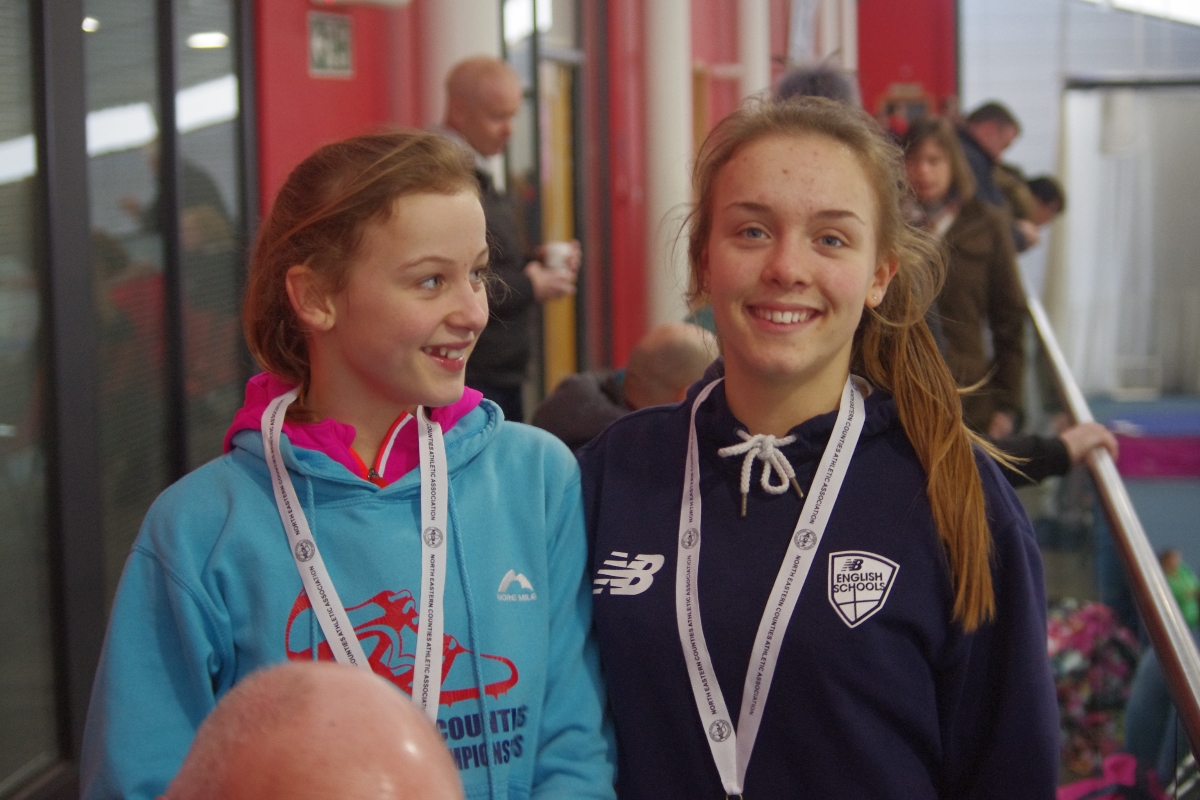